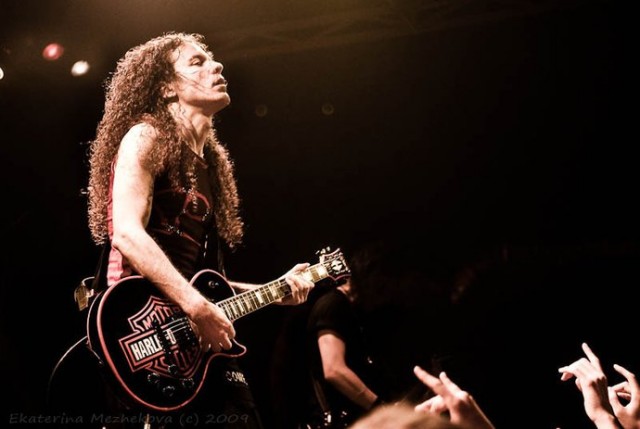 Marty Friedman’s guitar style is unlike anything other’s in the guitar playing world due to his masterly mixture of melody, exoticism, and good ol rock n roll.

And I don’t know about you, but like there to be more to guitar playing than an olympian sprint to finish a tricky, finger-twisting lead solo, which is why I made this guitar lesson about Marty Friedman.

You’ll see how he thinks about the chords he’s playing over, some interesting ways to make a melodic line, as well seeing him in action on some youtube videos you may have overlooked…..

For this article, I decided to change things up and do a powerpoint video while going between his tabs and parts of his own video lessons.

Like I say in the description for this YouTube video though, there’s a whole lot to any player’s style and that’s why this is so long. I didn’t want to give some generic tips and leave you wanting more.

However I couldn’t cover every inch of his style either, but you’re in luck.

In part 2 of “Hell Raising Lead Guitar,” I wrote over 25 pages of content going over nothing but Marty and his licks. I break down the arpeggios, the chord progressions, and the scales he’s using in order to help you realize how you can use them yourself.

Click the image below to check out Guitar School………. 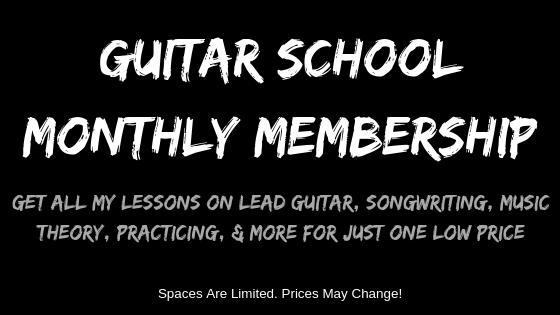 How To Use The Hirajoshi Scale

Progressions To Solo Over

Marty’s Solos You Should Study & Learn

Notes On The Video

These scale patterns are one thing that I mentioned in the video that I feel I didn’t explain very well so let me do that again now.

What I was explaining was a little trick I had to turn this Pentatonic scale into a Hirajoshi scale, and it’s pretty simple.

Well to make the hirajoshi scale I’ll add the notes F# and C, but remove A and D.

Like I say in the video you’ll have to learn the notes of the fretboard to get this, but please give it a shot. It’s one of the keys to making this a lot easier.

Another thing I mentioned was the diminished arpeggios, which Marty uses all over Rust In Peace and Dragon Mistress (his solo album).

Marty will throw these in between progressions like those listed above under “Progressions To Solo Over.”

For instance, he’ll either substitute Edim for Em or insert Edim before going to D or F#m.

And as for the progressions, I got them all by checking out either guitar tabs I had or guitar pro files I had lying around.

Eventually I’ll gather this stuff up and make a downloadable zip file for all of you to get a copy of this stuff.

Guitar Pro and tabs have been the key factor in allowing me to break everything down and learn directly from these players.

Using your ear along with this stuff is going to be what gets you ahead of everyone else who’s struggling to keep up with these guys.

Then you REALLY need to check out “Hell-Raising Lead Guitar Part 2” which contains detailed information about the guitar styles of Slash, Marty Friedman, Randy Rhoads, George Harrison, AND Eric Clapton.

What I do is I’ll take at least 10 of what I see is their favorite licks…….

I’ll break down the rhythms, the musical devices, the chord progressions, AND the scales behind it…..

And explain it all in a way that tells you how each player was seeing the fretboard when they chose the notes that compose these licks.

It’s quite literally never been seen before! And it’s the most thorough, step-by-step method to learn any of their guitar styles.

If you want to check it out, scroll back to the top of this page, and check out the product in that image below the video.

Thanks a lot for stopping by!