How To Create Sexy Spanish Guitar Music: A Lesson On Exotic Guitar Scales 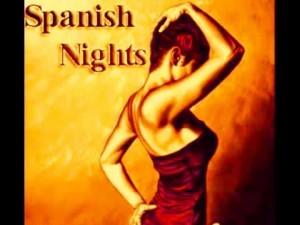 One of the things I’ve been getting into lately are these chillout mixes using Arabic, Spanish, and Indian melodies that you can listen to on YouTube. Ever since I watched Temple Of Doom when I was little, I’ve been entranced by anything that hints at exotic locales like deserts, beaches, city nights, etc.

So when I started playing guitar it was natural that I would become interested in the exotic scales section of the books that I bought. The only problem is that there were absolutely NO hints as to how to use them!

This is because the guitar instruction books do not have the goal of helping you create music of your own, but to play somebody else’s with the correct fingerings.

Well, that’s boring. You and I want the ability to create stuff out of thin air.

Today I’m going to show you how to do that with three of the most exotic sounding scales you’ll find: the Spanish gypsy, the Hirajoshi, and the Hungarian Minor scales.

Led Zeppelin’s Kashmir, the Beatle’s Indian influences, the soundtrack to Lawrence Of Arabia, Marty Friedman’s lead guitar style, Metal riffs, and even pop artists like Britney Spears and Madonna all use some form of exotic scales in their music.

And it’s very easy to pick out when you know that they don’t sound like or function the same way as major or minor scales do. Major/Minor scales are used because of the amount of pretty chords they contain, and how easily vocalists could sing them.

Not that exotic scales are hard to sing. It’s just that many exotic scales like the ones you’re about to see contain intervals that aren’t as pleasant to an ear used to music produced in the western hemisphere.

This is important to consider because exotic scales require more care than usual when you choose to use them. The minor pentatonic scale, for instance, sounds cool no matter which way you use them, but the following exotic scales will be difficult to use unless you take the necessary preparations……. 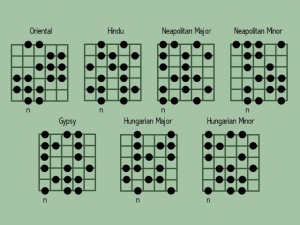 The most important thing to remember when you choose to play any scale is that you are making harmonies and melodies when using them. You combine them with other notes to make chords, and add rhythms to them to make a melody.

Don’t worry though. I’ll show you some examples of how to do this.

The most difficult part of using exotic scales is building harmonies out of the rigid set of notes you see above. That’s another reason why major and minor scales are so popular since it comes ready made with a few major and minor chords to throw together.

Exotic scales are not used like a musical key is. This scale, the Spanish Gypsy, is used to express a single chord in a unique way, the A7:

That’s 4 notes of the scale! That will function perfectly over A7, and the other three help give the exotic sound. Bb is a minor 2nd, D is a perfect 4th, and F is a minor 6th.

So the best thing to do is use this scale to accent this harmony or something similar to it, like F#m that contains the notes A and C# in the harmony.

Like I said, it’s hard to use this as a basis for a chord progression because of the Edim7, F aug, and C#dim7 chords that are diatonic to this scale. But it’s easier to use this progression when playing the A Spanish Gypsy Scale:

No matter what exotic scale you use, go for basic major and minor chords.

My favorite guitarist, Marty Friedman, loves this one.

This is nothing but a minor scale without the perfect 4th and minor 7th. If you already know the minor scale patterns, just remove the 4th and 7th notes in the scale and you’ve got this Japanese flavored scale. If you looked closely, you’ll see that this scale contains the 3 fundamental tones of A minor:

The intervals between A and F, as well as B and F, are what make the scale sound so exotic.

Make use of these intervals in your playing and you’ll flesh out the nature of the scale.

This scale has the same problems of all exotic scales, except even worse. The 5 notes available leaves even less room to create harmony.

I suggest using this scale in places where Am is a part of the musical key like D minor, C major, G major/E Minor, or basically any progression where an Am occurs and the exotic sound can fit in.

If you know your minor scales, this one is easy to remember too. Raise the 4th and 7th degrees a half step, and you’re done. Simple.

Here’s a chord progression I came up that uses the notes in this scale: 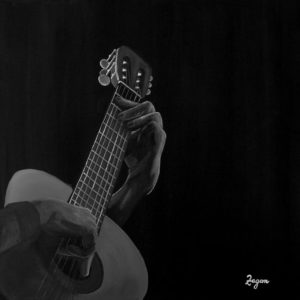 There are some other things I didn’t mention in this article however:

This is the other part of making music.

Without that knowledge, this is mostly useless although I’ve given several ways to use the previous exotic scales.

If you want to know more about using these scales in order to make your guitar playing stand out, then click the image below…..