How To Use Guitar Scales: A Guide To A Misunderstood Concept There’s a fairly consistent theme I’ve found when anyone new to scales comes to articles like this one…..

Why should you learn scales and what on earth are scales used for?

One of the first things I did when I started playing guitar was to buy a scale book, but it was mostly useless for a variety of reasons I’m about to reveal to you.

I struggled pretty hard to learn how to use guitar scales to make solos. Many guitarists are still struggling playing in time and properly gripping chords.

So trying to figure out why to memorize an F# Phrygian Scale is mind boggling to say the least!

However I’m going to go into a lot of detail about guitar scales, and show you exactly how to use them.

Plus I’m going to save you a lot of time if you read this and decide that now isn’t the time to learn scales.

Either way, I guarantee there’s going to be plenty of “AHA!” moments in store in this article……

Stop reading this article and go back to strumming chords if you’re not here to learn guitar scales for the purpose of either:

This is the part where you’re going to sigh and say to yourself: “Ugh this guy is going to talk about theory again!”

“Heads Up! If You’d Like To Learn Everything You Need To Know About The Fretboard To Master Guitar Scales, Then Click The Image Below To Check Out My Kindle eBook About Guitar Music Theory.” 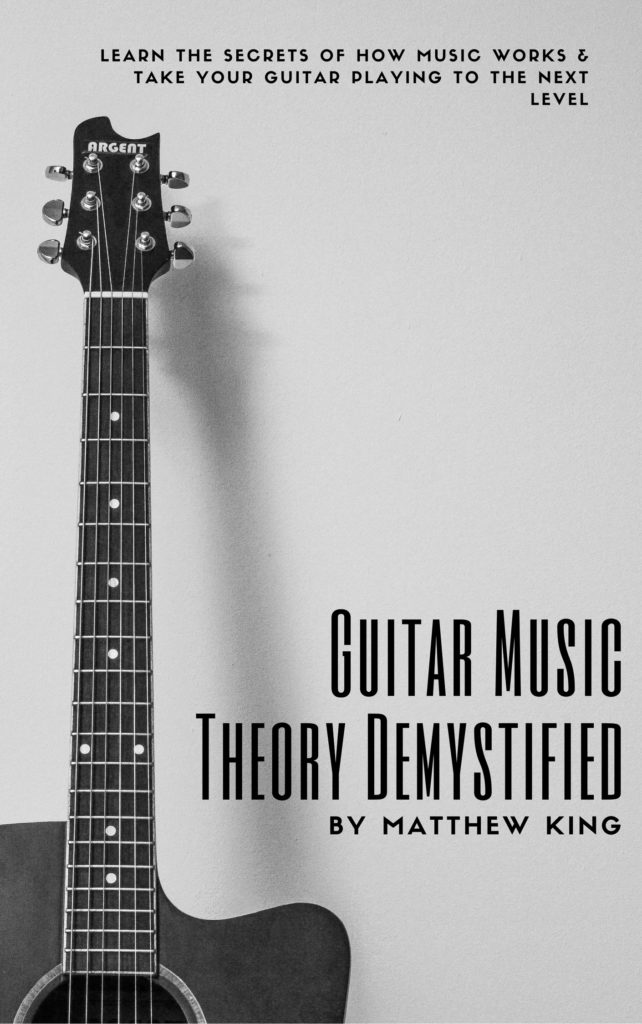 The music you’re playing is going to be organized by melodies, which come from scales. The chords are made from notes in that scale.

If there’s a solo, he or she most likely used 5 to 7 notes from one or more scales to create a solo from thin air from.

You can argue with me till you’re blue in the face, but it’s true.

The problem up until this point is probably that you have no idea how a mode or a major scale can help you create a better rock solo. This is understandable because many articles that go on about scales don’t place them in the context of the genre, or even give you a chord progression to try and use it over.

So having a fundamental understanding of how chords work helps you better interpret guitar tabs and later improvise riffs and solos (if that’s your goal).

You following me so far? If so, let’s get down to the nitty gritty.

The Biggest Mistake: Not Applying It To The Right Chord! Here’s How To Do That In The Simplest Way Possible…….

So to make this discussion as simple as possible we’re just going to talk about playing over one chord, let’s go with C major which across the neck looks like this……

Too many guitar players make this a lot more complicated than it really has to be because we’re scale obsessed. Basically, you want to try and make phrases that contain the chord tones of the harmony you’re playing over, which of course is C, E, and G.

Ignore why it’s C, E, and G for now as that’s a more complicated discussion…..

And also don’t limit yourself thinking that there’s only one scale will work over this chord. There’s several that will work if you just remember that YOU MUST PLAY C, E, AND G!

Why can’t you use a C minor, or C minor pentatonic? Well, there’s no E……

If you decide to do that, you can make it work but it’s trickier because you’re using a scale that has Eb/D# instead.

I can easily write a very long article talking about the many options you have available, but other scales you can use include A minor (pentatonic), G major, E minor, F major, and F harmonic minor.

So to sum it up, with each progression you come against you’ll have to make a decision of what scale to use over each chord.

The Pentatonic Scales, The Many Ways You Can Use This Simple Scale

If you’ve been playing for a while and already know this scale, you’re more than likely familiar with the 5 positions of this lead guitar scales for beginners…..

These patterns have been the basis of guitar solos in nearly every genre for decades, and they’ve received a major backlash because everyone uses them in the exact same way.

You see a C5, you play a C minor pentatonic scale. Then many people are more than likely to create variations of the same phrases you’ve been hearing throughout the classic rock repertoire.

However, you now know a very important fact of matching chords to scales……..

All you need to do is play one of the chord tones that match the harmony, and find a matching scale. This is one of the simplest ways to remember how to use pentatonic scales with chords!

So why now stick to C minor pentatonic? Why not use say, F# minor Pentatonic? After all it has an E in it…..

And if you had the C, ya know the root note, to the scale it becomes an F Blues Scale which you’ve definitely heard of…….

What you must understand is that more than likely, especially if you’re playing with a band, there’s a chord progression you’re going to be playing over. And if you’re adding something to what the bass player, drummer, and possibly 2nd guitarist is doing then your note choices will add or take away from the C chord they’re playing over.

Playing the C#, A, or B at certain points in certain ways will add a nuance to it, and you can make any of them work despite the fact that they’re not part of the C major harmony.

Using the B make a Cmaj7. Using the A makes either an Am7 or a Cm6. The C# is a minor 2nd that will give a Phrygian or Spanish Gypsy scale feel to it.

What I’m trying to help you understand is that there is no one answer to what scale to use at any point. If you understand how the chord is made up, your options are greatly expanded.

One more to prove my point with D minor pentatonic……

If you’d like to learn more about using pentatonic scales for rock guitar solos, then please check out my article about Slash.

Now it’s going to get a little bit more complicated, but not too much.

Obviously, you can use a minor scale with a minor chord and a major chord with a major scale. That’s the easiest way to recall the notes of a certain harmony quickly.

But the difficult part about using these scales is when you’ve got a chord progression that doesn’t fit perfectly within the key signature. Do you follow me?

Every musical key, due to the series of notes that make up the key signature, will create a variety of chords.

You’ll get C major, D minor, E minor, F minor, G major, A minor, and B diminished. Then there’s the minor 7th, major 7th, and dominant 7th chord you can create from this combination of tones.

Don’t get lost! All I’m saying is that those 7 notes create all these chords. Plug them into all-guitar-chords.com to see what I’m talking about.

To finish my point, using C major will make perfect sense if you’ve got a chord progression consisting of a combination of any of the chords up above.

The best time to use either a minor scale or a major scale is when you have a progression consisting of chords made from the scale you’re about to use.

This isn’t exactly intuitive though as you may have not learned all the notes of every major and minor scale, and don’t know all the notes of each chord. The only way to do this is to buckle down and start memorizing them. It sucks but it’s a tremendous help once you get this done.

About Modes, And Why I Don’t Like Them That Much…..

Now don’t worry about this picture because it’s pointless.

Instead, try to keep following what I just said about the chords in a key signature.

Again C major. But why don’t I like talking about modes? Because no one tells you the most important part of using which I already told you!

It’s about the chords, dummy! If you’re using lydian, phrygian, dorian, or locrian you need to match it to the chords you’ll be playing over.

Let’s look at F Lydian. Careful! I’m about to blow your mind……..

Whenever you use modes, you still have to be conscious of the notes that are in this scale, and how they’ll mix with the chord tones of the harmonies you’re playing over.

Showing you this example of F lydian shows my main frustration with modes: often they’re not shown as what they are which is different versions of other scales. You can’t use any mode without first creating a progression or identifying part of one that will work with the mode.

A few modes work great as jazz guitar scales because of the harmonies you’ll use them for. For a few tips though, Dorian modes work great with minor 7 chords. Here’s the C dorian scale, and notice the C – Eb(D#) – G – Bb(A#) notes inside of it.

These are two of the most commonly used Jazz scales due to how often dominant and minor 7ths are used in their chord progressions. For maj7 chords? Use the Lydian mode…….

The Dos And Don’ts Of Exotic Scales

Exotic scales for guitar are another difficult concept to teach as most guitar magazines in the past have just shown it as basically a lick to learn.

Every one of these scales will have similarities to minor and major scales, and have a unique combination of intervals for you to exploit when making melodies. This is an important factor to consider whenever you use these, or any scale.

However the tricky part is that these scales don’t have a great set of chords to go with like a major scale does. This is the challenge to using them!

The backing tracks will often do nothing but support the riffs or licks the guitarist will create. If you don’t do this, you’ll end up with a series of chords made of diminished and augmented chords that are harder to use in a rock riff or pop chord progression (though it’s possible).

The same principles will be in play with the D Hirajoshi scale seen below:

The notes in sequence will give off a Japanese feel, but creating a chord progression to support a melody created from it is still difficult. And this one only has 5 notes!

So the same overall lesson still applies. Pay attention to the notes you’re playing and start to understand how these create chords and melodies!

Here we are at last! The end of the article and now a simple overall picture of the ways that you can understand what are guitar scales used for.

There are other issues we couldn’t cover here like creating chord progressions, the techniques for creating melodies, and then how to form solos. However, we did go over some of the basic building blocks.

Simply understanding that scales help create chords, and that your choice of scale changes from moment to moment will be enough to get you started. So start creating some exotic melodies, try out a lydian scale if you want, and continue ripping the pentatonic scales if you want to keep it simple.

Here’s a final checklist of things that you can do to make sure you’re using the right scale: