If You Want To Know How Slash Plays Guitar Solos, Then Read This Guitar Lesson 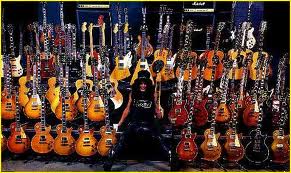 If I gave you a lead guitar lesson filled with nothing but shredding pentatonic scales, would you sound like Slash? Absolutely not. What if you had one of those guitars in the picture above? Nah. Well, what is it that’ll make ya sound like him?!?!

When you’ve been handed a scale to play, it’s as disappointing as getting a girl’s name, but not her number. This is highly valuable info that we’ve been denied! And the difficulty of getting it can make us feel helpless at times.

And I drove myself CRAZY to figure out how Slash, one of my favorite guitar players, took this simple scale and made music with it. I bought all the tab books, watched him solo on the GnR Tokyo show that’s on DVD, and read every interview to get some tiny hint as to what’s brewing in his mind when he created a solo like in Sweet Child O’ Mine.

The first thing I learned was that Slash’s interviews are unreliable, but that the music itself tells you everything you ever wanted to know about his lead guitar style.

Here’s how the chords, note choices, and techniques in his playing has made him an icon in rock guitar……..

How Every Lead Guitarist Prepares For A Guitar Solo

The most dangerous assumption a lot of guitarists make is that these solos and lead guitar parts appear out of nowhere. The truth is that a capable lead guitar player has developed his skills by running them through many different musical situations, and when it comes to collaborating with the songwriter, he’ll think of the best plan for creating a solo.

The secret is that even when a lead guitarist is improvising, they are using various bits and pieces of musical knowledge to form a coherent piece of music. Another secret is that it is the harmony, and not his tricks or scales that determine where the solo is going.

I know for a fact that Slash studied many of the greats like B.B. King, Jimi Hendrix, Jeff Beck, Joe Perry (his favorite), and Eric Clapton. That alone will tell you a lot about his style if you take the time to study these guitar players.

In the final section, I’ll give you a list of his favorite techniques that he borrowed from these players. 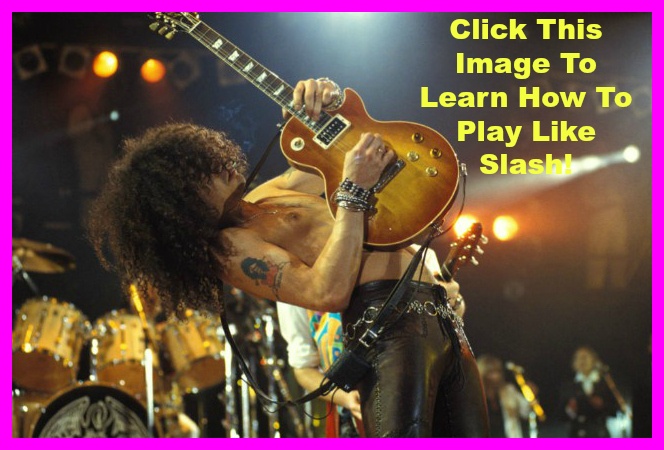 Now let’s list the steps every guitarist should take for preparing a guitar solo:

A Look At 3 Of His Most Popular Songs 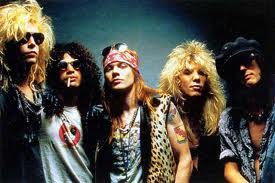 Now to give you more info about Slash’s style, and get some insight into the questions I just gave you, I’m going to show you what’s going on behind his solos.

The first solo of Welcome To The Jungle is just a one chord vamp over E major for 8 bars:

This is a very basic set-up for a lead guitarist to play over. It’s just one chord, and you have plenty of time and lots of freedom to make music over it.

At this point of the song, the rest of the band stays out of the way and let’s Slash solo, but this is not true everywhere. Sometimes there will be some back and forth between two guitarists, the singer, or the rhythm section.

And obviously this is blues influenced hard rock song in the same vein of Aerosmith. Thus Slash chooses many musical devices and melodies that occur in the blues.

But how does this solo fit into the rest of the song? What I just showed you is one chord, but it’s important to know that is only a single moment of the entire song. This centers around E, while the intro is in B minor, the main riff in A minor, and the chorus in E minor.

Getting a better understanding of the song structure, even at this simple point, will help you prepare for whatever choices you’ll have to make later on. 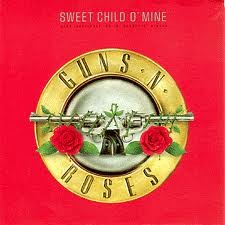 Those great lead guitar lines in between the choruses of Sweet Child O’ Mine contain a simple chord progression of:

There’s more chord changes here, and the major chords fits the lighter tone of the song.

To prepare for this solo, Slash saw that this was a recurrence of the harmony supporting the main riff. He also knew that these chords were very closely related as they’re centered in G Major or D Mixolydian, depending on the way you look at it.

All that matters is the location of the chord shapes:

If you look at the solo, you’ll see that he sticks to these chord shapes.

Also notice that there’s two measures of each chord. If you practice playing over two bars of D, then two of C, and so on you’ll get a feel for what Slash is doing and where he’s going.

Ignoring this is dangerous because the lead guitarist is supplying the main voice. If that voice is rambling, or not paying attention to the rest of the band, it can help the song fall apart.

The ending of Paradise City consists of this high energy chord progression expressed in single notes:

If you pay attention to the overall song structure, you would see that this is a reinterpretation of the opening chord progression. Only this time it’s played in powerchords.

Power chords are a great opportunity for lead guitarists to explore new ideas on the guitar because of the progression’s ambiguous nature. Think about it, there are only two notes in a power chord, which means you can play almost anything over it as long as you sort-of kind-of highlight those two notes.

You’ll just have to test and figure out how far you can push the harmony, while following along with it.

Depending again on how you look at it, this is either in G Mixolydian or C Major.

Another thing is that this is obviously the grand finale to the song. Slash takes this moment to really go balls out, while maintaining the melody and atmosphere of the entire song.

Before we get into specific things Slash does over the chord progressions just shown, let me tell you the three most important raw materials every lead guitarist has at their disposal:

Use all of this knowledge and take the time to really think about the composition of your solo. The combination of these three elements is what’s going to determine how your solo/lead guitar parts are going to sound. Ignore them at your own peril

Finally, here’s a list of specific things that Slash does over progressions like the ones we just discussed. There are many, many more but these are his most significant ones.

At first glance, these may not help you much, but that’s why I went through a couple of the chord progressions first.

This is one of the biggest mistakes educators have made when discussing lead guitar: absolutely no mention of how the harmony influences their note choices.

So never learn a solo or create your own music without taking this under consideration. And if you’d like more info, please check out my video about Slash. 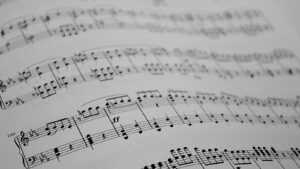