Guitar Pro 7 Review: Here’s The 9 Coolest Things You Can Do Now In GP7 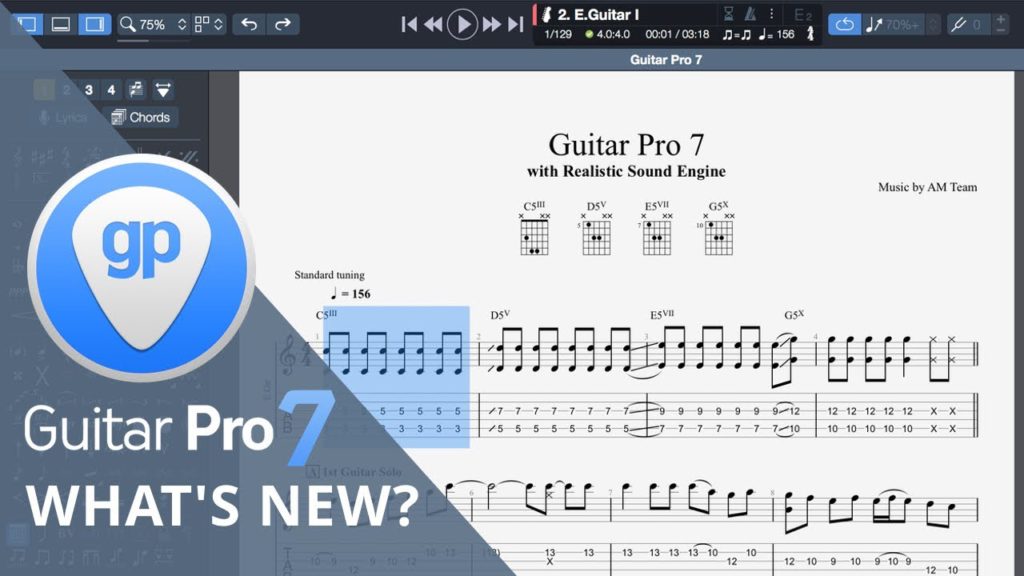 Guitar Pro has been an indispensable resource for myself as many artists don’t have songbooks, and the ability to see the parts played on the fretboard really cut my learning curve down when I started many years ago.

With many of the features I’m about to reveal to you in my Guitar Pro 7 Review, Guitar Pro has allowed me to widen my knowledge of chord progressions, pick apart every little nuance of a melody I’m studying, and of course learn some intricate guitar solos note for note.

If your goal is to become a competent musician, songwriter, or teacher then this software is one of the best tools to have at your disposal.

Easily See All Of The Score In One Window 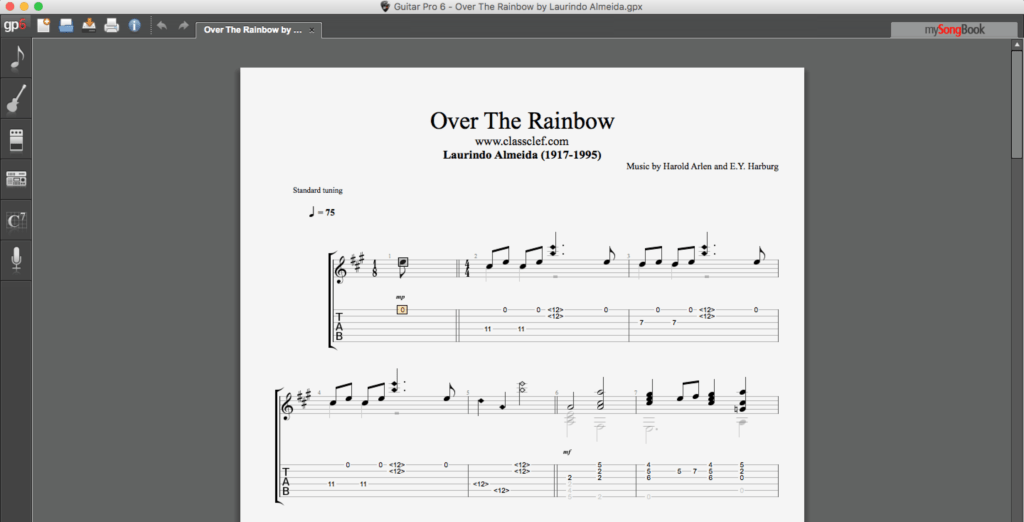 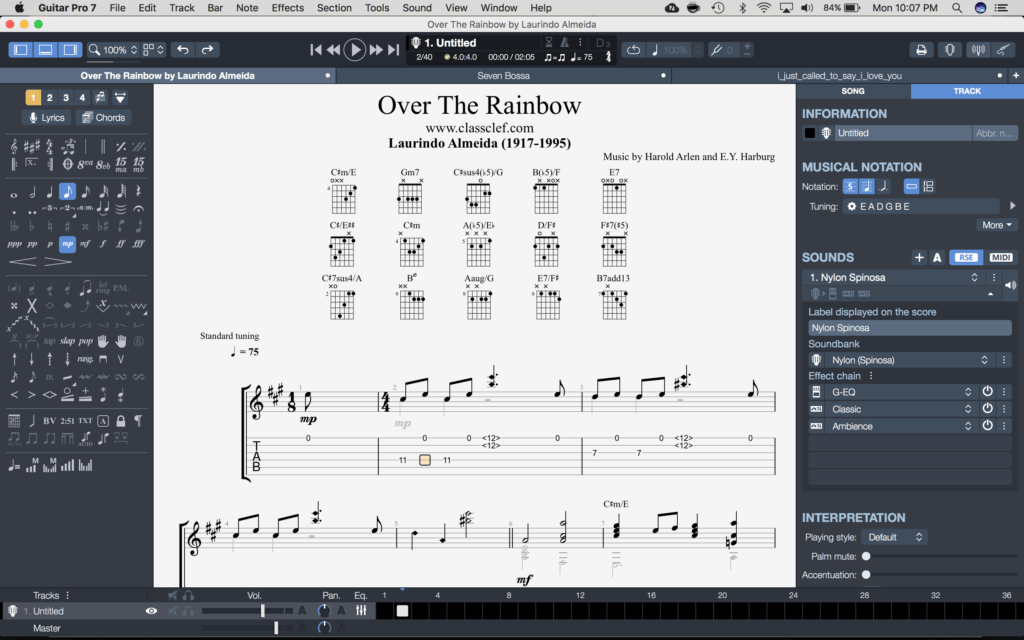 The most frustrating part of Guitar Pro 6 was organizing all the windows, the lengths of the bars, and the overall size of the tab so you could see what you were looking for.

That’s no longer a problem in GP7 as the tabs pop out more, are easier to scroll through, and are much bigger than in GP6. Just look at the differences between the two in the screenshots below.

Can you tell the difference between the two? (besides the appearance of chord diagrams in the second shot)

GP7 has the tab take up more room and there’s more white space now compared to GP6. This is one of the best benefits when comparing guitar pro 7 vs 6 or thinking of getting a guitar pro 7 upgrade.

It’s essential when using a tablature editor, whether for learning licks or for songwriting, to have as big of a view as you can get. If you’re sight reading from the program, this is even more essential as you can’t be ready for the next bar or beat without being able to see the score.

Toggle The Editing Windows On & Off

See the buttons highlighted in blue at the upper left corner? Those are the buttons that allow you to turn off each window used for mixing, sound design, and editing!

This is a great feature for songwriters who want to switch between the guitar, bass, piano, etc. and quickly turn it off to focus back on the score.

Of course you could do this in GP6, but this time in GP7 you get 3 buttons to help you turn off and on the windows you need.

These windows include the editing tools window, the mixing window, and the sound design window as well. I usually need both the editing and mixing windows up when I’m songwriting as I need to mute, solo, or edit many tracks simultaneously.

And with the overall redesign, nothing feels cluttered or out of place even with all these windows on.

Watch The Notes In Tab Played With The Scale

This is not necessarily a new feature, but with the advances in the screen design this tool is even more useful than ever before.

To start you just need to click on the Tools menu, scroll down to “Scales”, and then bring up the scale you need, as seen in the screenshot below. 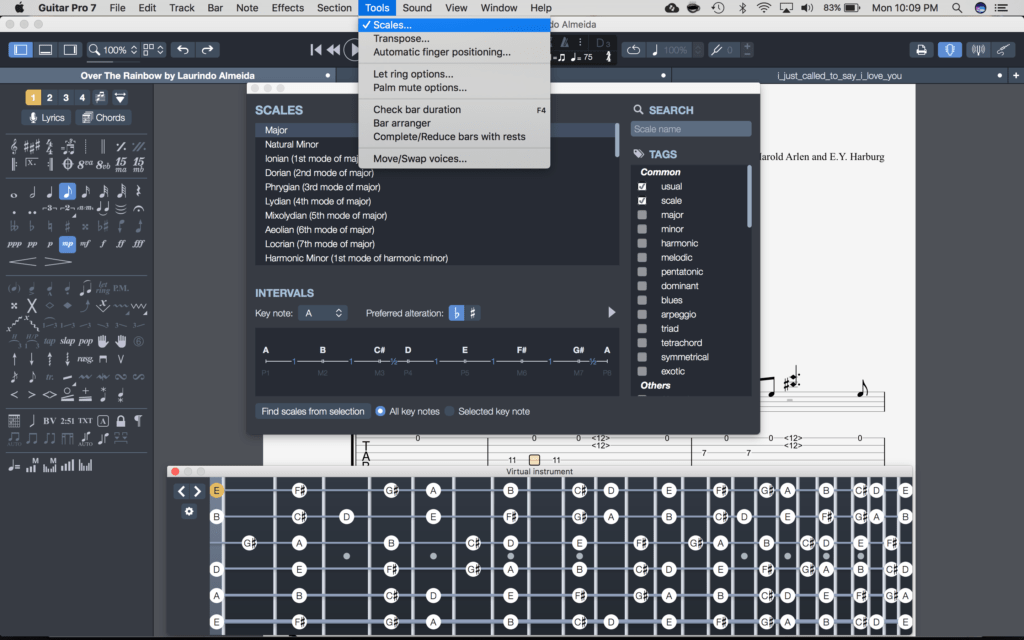 What I particularly love about this feature is that it gives you a view of the entire fretboard, and not just the first 12 frets as some programs do. Plus, the scale will be broken down by the intervals it’s made up of, which is a great reference point for a theory nut such as myself.

After you’ve selected your scale of choice, you just need to press play and watch as the notes light up across the fretboard viewer.

It’s a great tool if you’re breaking down the composition of a solo or riff, or just want to see how the chords stay within a scale or break out of it.

Just make sure you’ve got the right scale selected!

The new design features make the job of a songwriter, arranger, or a bandleader much easier. If your goal is just to get the chord changes to the rest of your band in preparation for a jam session, just use the new jazz score and jazz chord diagram features.

Below is a few screenshots telling you where you need to go in order to create such a score. 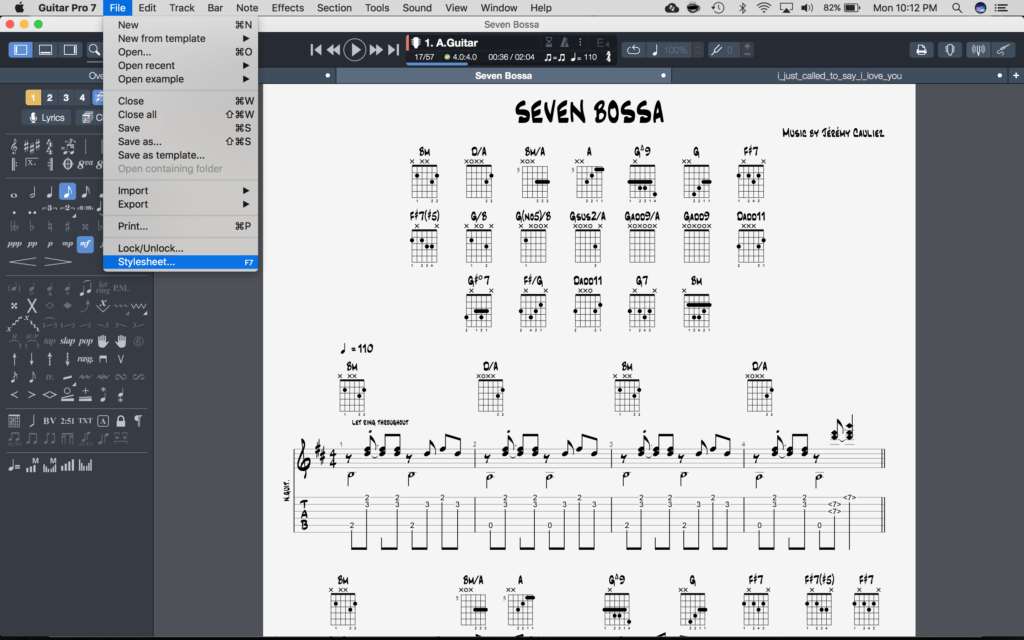 With the next few pay attention to the blue dots where you can select options for “Jazz.” 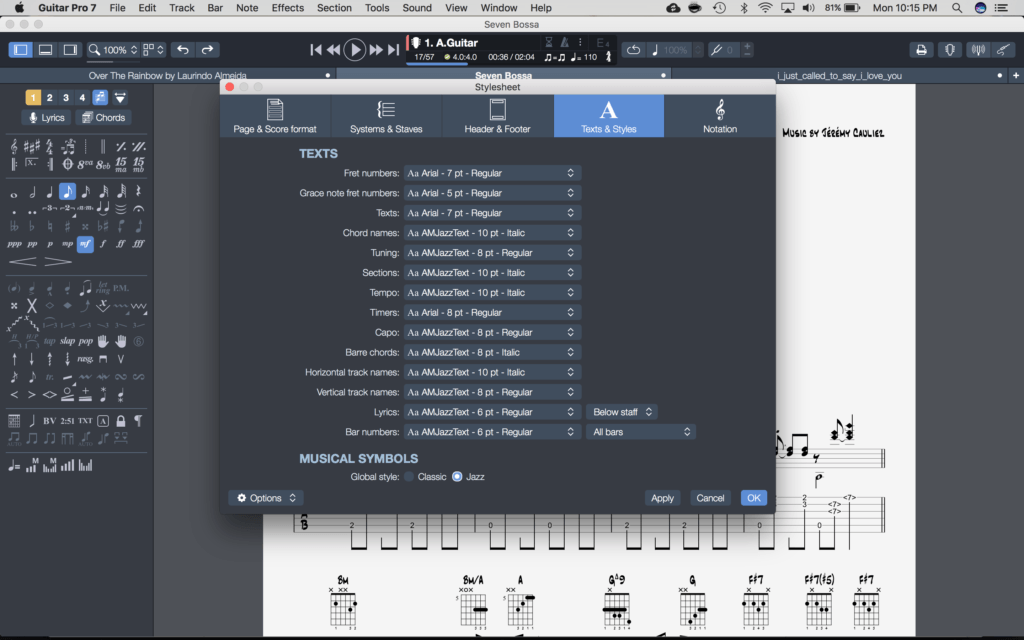 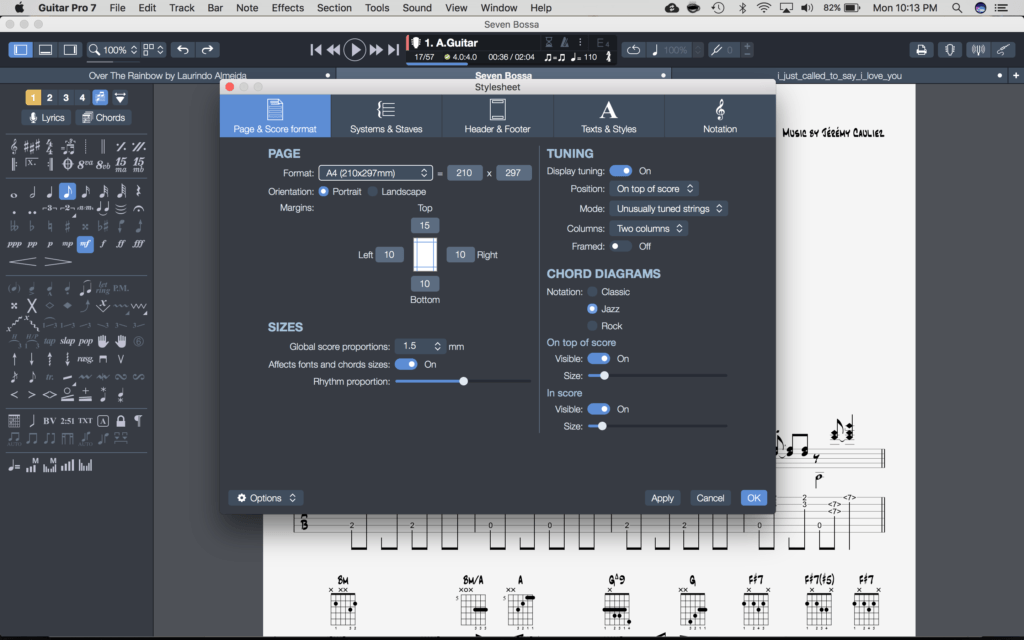 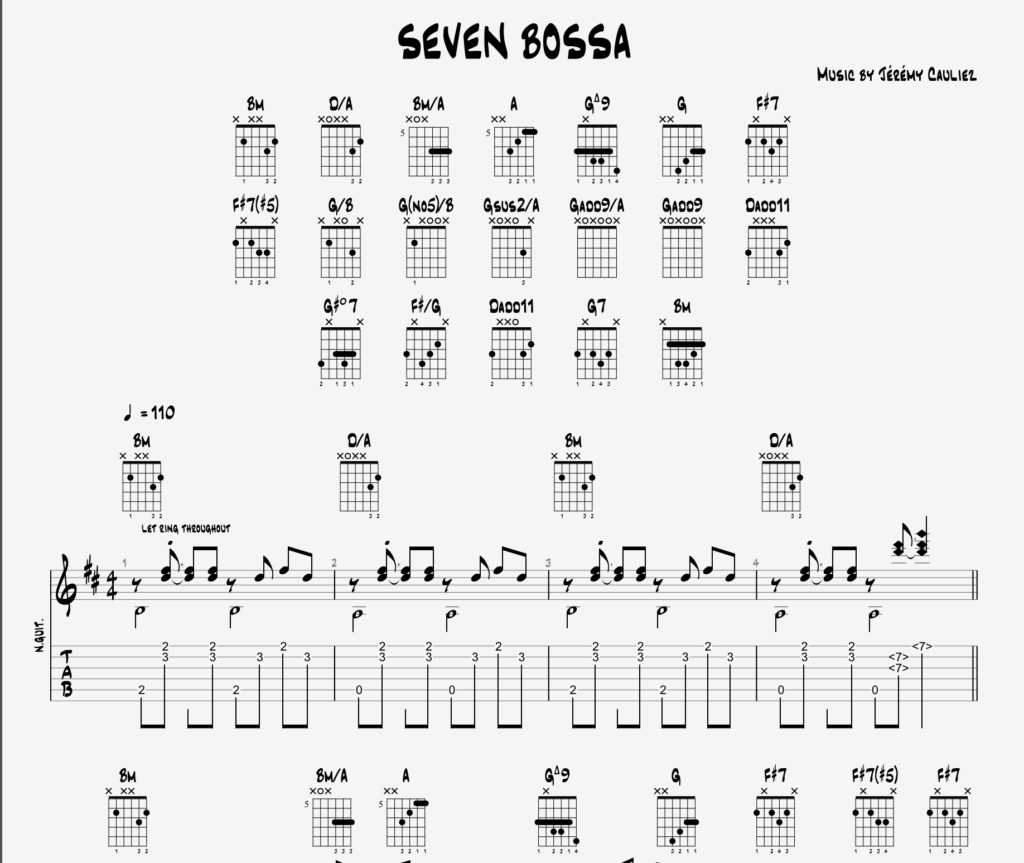 If you looked even closer at all of the options, you’ll see that you have the ability to resize and format almost every single section of your score as you see fit.

Use The Even More Realistic Soundbank For Designing Your Own Sound

Although you won’t have all the bells and whistles of a DAW program like Pro Tools or Logic Pro, you will have plenty of stompboxes, guitar presets, and a variety of other instruments like drums and string sections to create a new track from.

Before now in GP6, you had to switch between several screens and buttons and work a little bit to dial in a sound. For those like me who just want something quick and easy to pull up, there are tons of presets for rock, blues, metal, jazz, and country sounds amongst others to help you pull up a sound you need at the moment.

Of course there’s still the ability to dial in your distortion, reverb, delay, and EQs as you like.

I had fun switching to flamenco, dobro, and modern nylon while working on a transcription of the classic song “Over The Rainbow.” 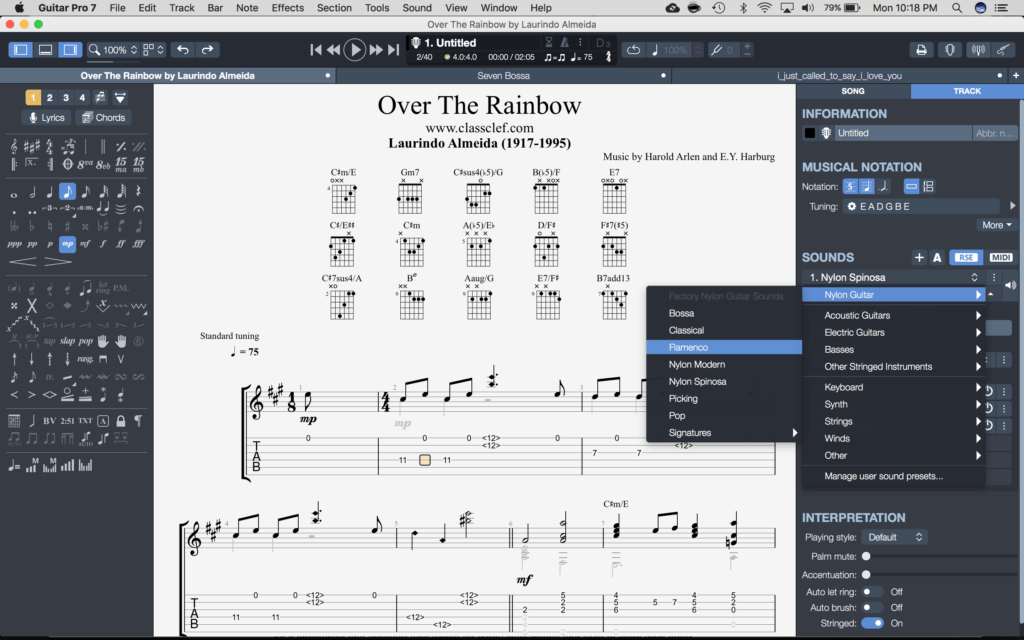 As a songwriter and arranger who writes for many instruments and likes to learn from other scores, this is a great feature for anyone who is solely a guitar player and one of the ones I’m most excited to share in this guitar pro 7 review.

All I needed to do was open up a guitar pro file where the keyboard is prominent, like in Stevie Wonder’s “I Just Called To Say I Love You,” and went straight to the electric piano part. There was all the piano parts in tablature notation. 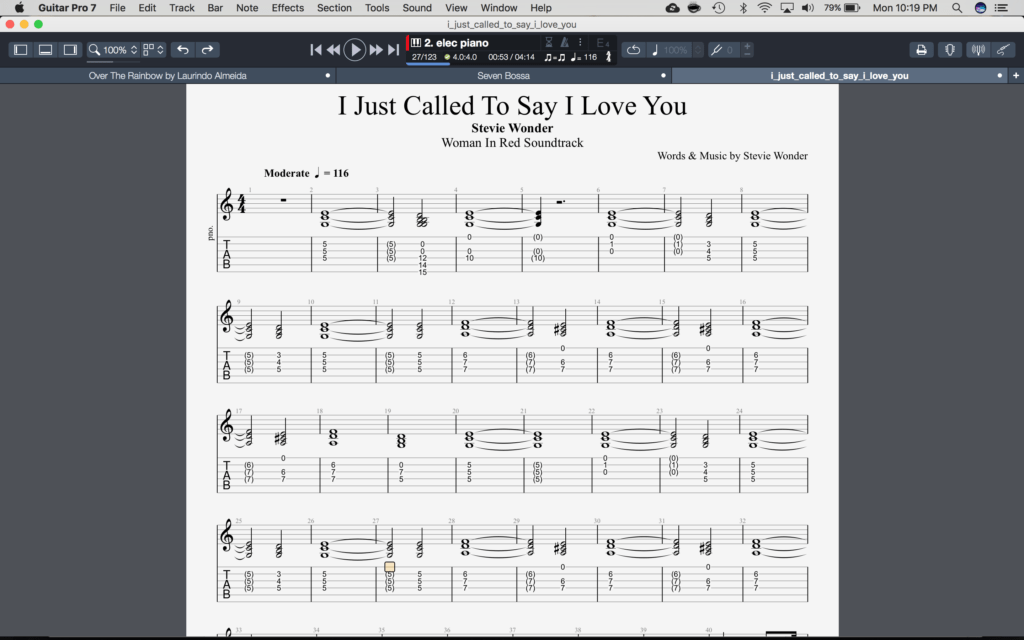 However, I recommend using this as a new way to get chord or piano part ideas, and not necessarily as a way to instantly get parts written for the guitar. It can help, but knowledge of both the fretboard and the keyboard is what’s going to help you with such a task.

This feature will make that job a lot easier. 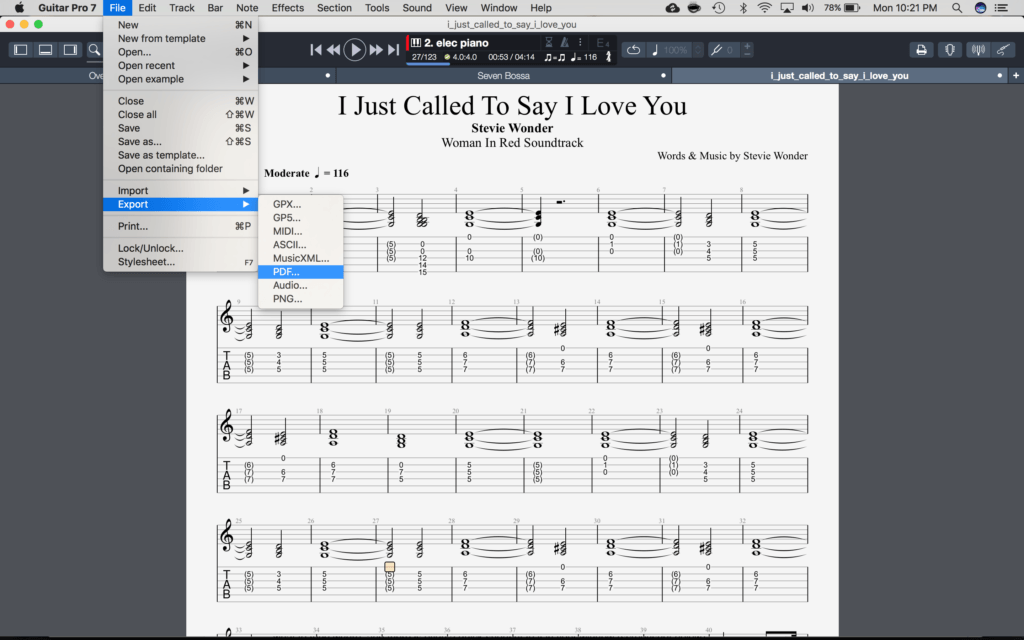 This was an especially frustrating issue in earlier versions as you couldn’t share guitar pro files with anyone who didn’t have the program or the newest version. However now all you need to do is use the Export feature found under the File menu.

Along with GP5 and GPX, you can also export to PDF, PNG, or even to an audio format too.

Plug Into The Existing Tuner & Play Your Guitar Through The Interface

There are tons of ways to tune your guitar, and another one may seem like overkill. However if you’re using Guitar Pro as much as we hope you do, then this feature can’t hurt.

It’s gotten a serious upgrade since GP6 in that you can simply play all six of your strings to know what to tune where, and there is even a quick shortcut to it in your window (screenshot below). 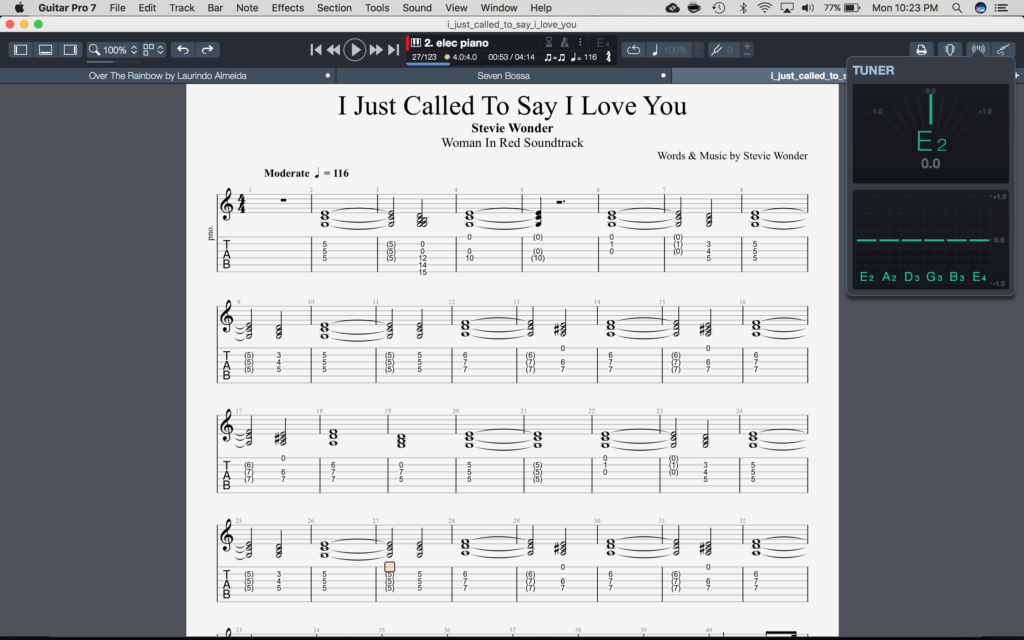 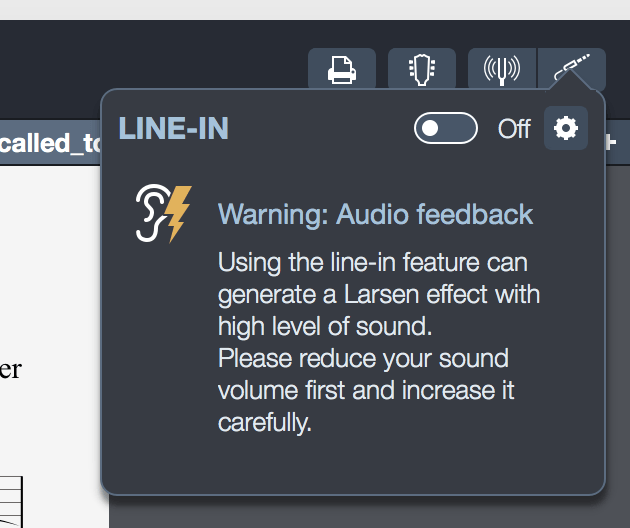 If you’ve got a way to plug your guitar into your computer’s soundcard or if you have an audio interface, then you can insert a more direct line to the tuner and use the built in bank of sounds we mentioned earlier.

Just use the shortcut seen beside the tuner, and you’ll be all set.

Even though I’ve been studying harmony, songwriting, melody, and overall music theory for many years it’s great to have some help choosing chords.

In the transcription of “Over The Rainbow” that I mentioned before, I used the chord feature to choose the appropriate chord diagram over some shapes that I hadn’t reviewed before.

See the screenshot below to see what I’m talking about.

This feature in particular is what I love about Guitar Pro in general as I can review tablatures easily from my computer, and learn new ways to use chords together.

And that’s it! I hope this blog post has helped you find new ways to use Guitar Pro and consider upgrading to GP7.

If you have any questions about how to use some the features mentioned here, please post a comment below.