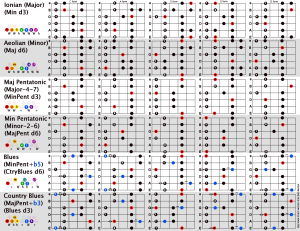 Every music theory book I picked up at Guitar Center the other day made me shake my head in disappointment. It was a barrage of scales and chords, scales and chords, and more, AND MORE! All the names like “Creative Guitarist,” “Fretboard Logic,” or “Everything You Ever Wanted To Know About Theory” suggested they had spent more time on the title than the content.

Immediately I went back to my clueless beginner self. I remembered thinking what the difference was between these music theory books, and why did they focus so much on chords and scales?

Supposedly, they’re important and all, but why are these guitar books all explaining the same things about music theory? Do they really know what they’re talking about?

The truth is that there’s a huge difference between playing chords and scales on the guitar, and knowing the fundamentals of music theory. Read on to see the reasons why we’ve confused this for so long, and why most of us now HATE music theory……

The Rules Do Not Apply To Guitar Music Theory 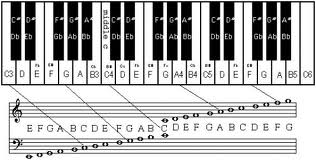 All the rules of music theory are broken every single time someone plays rock guitar. Every time a guitar player tries to use the rules with this music, they will of course say it’s bullshit. It flies in the face of everything they’re playing!

This is because you really don’t need to know intervals, diatonic harmony, or the circle of fifths when you’re trying to play Enter Sandman. You look at the tab, put your fingers in the correct spot, and then you press go.

The books and tabs have confused us all into thinking that this is all there is to music. But it couldn’t be further from the truth.

Making music is about arranging chords into harmonies, creating a catchy pattern of notes that will turn into a riff, and then putting sections of these riffs together to make a song. The chords and scales barely give the introduction to the story of music making and songwriting.

As much as I love rock music, I’ve got to say that its avoidance of this knowledge has hurt it instead of helping it. It’s one of the biggest hypocrisies ever claimed when it comes to making music……

Rock Guitarists Are Intimidated By Theory

The hypocrisy of rock music is that it claims to be harder to create yet it sticks to the simplest harmonies and arrangements. Then the fans of rock music criticize the fans of pop music or rap music for being easily seduced by the catchy melodies! They’re zombies they say! Bullshit, rock n’ roll fans are narcissistic and afraid of any challenge to their illusions of superiority over other genres.

The truth is that simplicity does not arise out of ignorance.

Making music has suffered from the belief that it must be very easy to create. I’ve heard of several popular musicians taking no longer than 10 or 15 minutes to write a song’s melodies, lyrics, and harmonic structures. Tchaikovsky supposedly wrote the music to his symphonies in little under a week, and the real work came when he had to orchestrate everything. But that’s another story.

The Apple computer, however, was made out of a grueling process of making and breaking down a computer’s parts until they got it right.

How would Apple have suffered if they had the belief that creating a computer couldn’t take more than a week?

I’m not saying that the simple process of writing melodies should be hard, but we aught to take up the struggle to create a better product.

We Think That Theory Hurts Your Playing 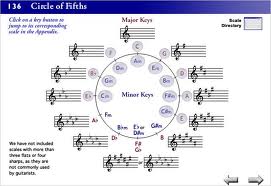 They claim that theory makes them think too much, and hurts their playing. It does when you apply the incomplete version of theory I alluded to earlier.

According to the book Blink, the ability to lose yourself in any activity comes only after immersing yourself in your field of expertise. Once you’ve grown comfortable playing within a musical structure, then you can be free to walk within it.

The author Malcolm Gladwell talks about improvisational comedy and how it involves people “making very sophisticated decisions on the spur of the moment, without the benefit of any script or plot.”

There are two reasons why they can do that successfully and generate funny shows night after night. The first is that everyone in the troupe has rehearsed their basic skills extensively. The second is that, at the time of the show, they are all operating based on a set of agreed-upon rules.

In guitar, we don’t know what the rules are!

The biggest problem is that we don’t know how to implement theory knowledge. Once we learn a new power chord shape, how do you use it in your playing? Most concepts are notorious for being thrown out there with no practical application, like discussions of rhythmic notation in beginners books.

What enhances the problem is that music theory is a metaphysical concept. If you can’t hold the concepts in your hands or see it in action, it is very easy to dismiss music theory as not very important or useful. This is also the reason why art, and even science, is regularly dismissed as unimportant for survival.

The word “theory” is also misleading because it doesn’t accurately explain what guitarists should be learning. What great guitarists have actually learned is how to create harmony and melody through their guitars, and in the process they ignored the idea of memorizing tons of patterns.

But how else can you break down sounds without labeling the parts of music and turning them into concepts that we can then communicate to each other? That’s partly what theory does. Otherwise you’d be spending 30 minutes explaining all the frets you’re jumping between…..

There’s Some BAD Guitar Advice You’ve Been Programmed With

While learning the guitar, we’ve been given advice that’s well meaning but entirely useless. In one article I’ve read, Eddie Van Halen suggested to the reader that I mix the 12 notes “in my own way.”

What the hell are you talking about Eddie!!! Here’s some other popular, yet incredibly useless bits of advices:

It doesn’t matter how long you practice or what you practice if you’re not pushing yourself out of your comfort zone, and learning new ways to make music.

You could practice strumming for days and still not be able to play a more difficult chord change until you try it. Same thing for scales in that practicing a pentatonic scale over and over won’t help you turn it into a melody or interesting pattern.

All of this advice is well-meaning, but suffers from being too general to implement.

Avoiding the study of theory, aka music, allows every so called musician to live in this fantasy world where they don’t need it. By blasting it, and dismissing it, they avoid reality. And the reality is that you need it, but it’s too hard to get, you think.

Theory never has, and never will be a replacement for composition. The only reason to learn what intervals, scales, or chords are is to better interpret the patterns in the music you want to emulate.

Theory is the language of music, and you must learn all of your grammar so you can make the most effective “sentences.”

In my opinion, every piece of music you’ll write is in direct competition with everything your audience has heard in the past. They won’t be impressed unless you surpass or rise to the same level. Knowing your barre chord shape and a few scale patterns will rarely suffice.

And too many musicians go through this masochistic process of sucking at their instrument for years. And it’s all because of an irrational fear of learning that you may need to work at it! They think that somehow they’re going to magically absorb secret knowledge of guitar by sweating in a dungeon for years, while playing the same songs.

We don’t have to do this. This is our passion and maybe our career we’re leaving at stake yet we want to uphold this jackass rule of “respecting the process.” We don’t even know the process!!!

We’ve Gotten Confused About What “Theory Is”

Real quick, I’ll list what theory is all about:

That’s it! This is nothing new. It’s just been skipped over in the guitar universe because we’ve focused way too much on exercises and virtuosity. Let me share with you this quote from Walter Isaacson’s book about Steve Jobs that explains this:

“In his piece, Grossman correctly noted that the iPhone did not really invent many new features, it just made these features a lot more usable. ‘But that’s important. When our tools don’t work, we tend to blame ourselves, for being too stupid or not reading the manual or having too-fat fingers….When our tools are broken, we feel broken. And when somebody fixes one, we feel a tiny bit more whole.” -On pg. 473

The EXACT same thing has happened with guitar. Our chord shapes and scale patterns are broken, when you use them to create music. They limit your creativity, and keep you trapped in an incomplete perspective on what making music is about.

The solution is to get the tools to interpret what had worked in the past. In music, this boils down to theory knowledge AND a good ear.

It also involves mixing different thought processes like the way we hear plus the way we see. This gives us more ways to interpret our work. If you can hear a piece of music being played while seeing it in sheet music, then you’ve got a leg up.

Theory plus fretboard knowledge allows you to play any chord in HUNDREDS of different ways. This is why most guitarists can’t think outside the box. They never understand that they’re actually playing the same harmonies all the time because they stick to the same notes and scales.

When you understand your own grammar and those of other artists, your musical knowledge increases literally several hundred times. This is because you not only have your own unique perspective, but that of everyone you’ve studied.

I hope you enjoyed this article and helped you understand some of the struggles to using music theory with guitar. If you’d like more info, please go sign up for my newsletter…..