What Is Good Music??? 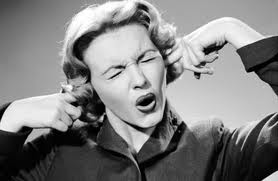 In some magazine I read way back, some girl I’d never heard of had her own block quote saying “I don’t think Katy Perry or Lady Gaga is the best music in the world right now” to paraphrase a comment she was making about that year’s Grammy nominees.

This past Sunday, that comment was brought back into my subconscious as I read facebook statuses and tweets in which everyone declared that the Grammies were either A) rigged by the major record labels who didn’t support “good music” or B) reinforced the voice of the “people” by giving the Grammy to (insert favorite musical artist, that won, here).

One popular consensus is that Mumford and Sons/Avett Brothers/Arcade Fire/Esperanza Spaulding = great unappreciated music unknown to the masses, while Cee Lo Green/Bruno Mars/Lady Gaga/Katy Perry/Eminem/Justin Bieber = horrible music fed to the ordinary people, who are unlike you and me, through a brilliant inception executed by the brilliant dream thieves known as major label marketing execs.

Here were a couple of the greatest hits/tweets I’ve seen since Sunday night:

Voices of the People 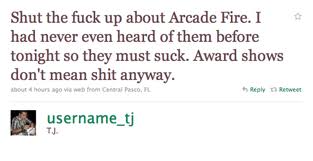 “Um, not knowing who Esperanza Spalding is doesn’t make her a nobody….it makes YOU musically ignorant…again, i implore you to go sit down.”

“Arcade Fire?! WHO ARE YOU? I bet half the population have (sic) never heard of them. Kings of Leon should have won! FAGGOTS.”

“Seriously, Cee Lo Green should never be allowed to perform alongside anyone but puppets and Gwyneth Paltrow again.”

I, being the easily manipulated zombie with bad musical taste that I am, had never heard of Mumford & Sons, the Avett Brothers, or Esperanza Spaulding although I did have some of the others just mentioned.

So, I did what I normally do in this situation and listened to them on iTunes, where I proceeded to download tracks from them as well as Lady Antebellum and Cee Lo Green. I desperately wanted to know the true path I had strayed away from so I could absolve these terrible sins from my blackened soul!

What happened? Well of course I recognized the great talent they all had and admitted to myself that I wish I knew about them before they won a Grammy.

We all make mistakes after all.

Should I make a choice over which side I’ll take up arms with until the power of “good” triumphs over evil?!

Well I need to tell you a story first before moving on, but don’t worry.

I’m not trying to convert you.

A few of the most epic, and seemingly endless, battles of all time include the Beatles vs. the Stones, Republicans vs. Democrats, Satan vs. Jesus, and the Roadrunner vs. Wiley Coyote. All those involved in this fight desperately need allies to help win this battle, and each side is currently rubbing their palms together as they imagine ways to surprise the enemy and reveal their ignorance.

Question: does a side need to be taken? 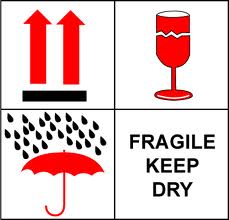 One side I took early on was If would be a Beatles fan or not. Everyone likes the Beatles it seems, and many have this inner battle over whether they should like them too, like everybody else does. While considering this decision for myself, apparently no one else liked my favorite band at the time, Metallica. Or so I thought.

Ole lonely me believed that people who liked the Beatles didn’t know what good music was because they listened to what EVERYONE likes.

It was like if everyone was jumping off a cliff they were listening to Abbey Road while doing it!

So I repeated my enthusiastic descriptions of Metallica’s bone breaking riffs, epic song structures, and spiraling intensity to anyone who would listen, which wasn’t for very long. At the time, Rolling Stone had released their “500 Greatest Albums of All Time” and my high school classmates loved to point out how Sgt. Pepper’s was no.1, while my beloved Metallica was buried behind the leaders of the pack.

My reaction? I felt the need to prove Metallica’s superiority and show others the way they were clearly ignorant of.

I thus drafted a list of reasons why the Beatles silly love songs were inferior to the Master of Puppets in that there were no solos, Metallica would never say they were more popular than God, their songs were too short and simple, and Rolling Stone was run by morons. I was a budding writer at the time whose journalism homework was to regularly contribute pieces to an online website my school had. I reviewed each reason thoroughly (which wasn’t enough), rewrote the article several times (still not enough), and grinned as I began to think of the looks on my classmate’s faces as their illusions would be shattered by my brilliant reasoning reinforced by the truth that only I knew!

Their reaction? They read the article, and didn’t say much about it. Instead of admitting the wrongs they had committed and the truth they now had to accept, my classmates went about their business and kept enjoying their weird songs about shows on trampoline that couldn’t get no worse.

I foolishly thought I had won the argument after hearing their silence. All as a result of my stunning logic. 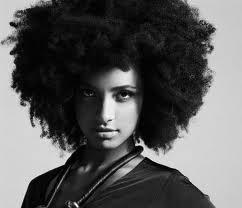 Quite frankly, my ego was running amuck back in those days. If my classmates, my brother, or the Grammies didn’t reinforce my expert opinion about what was good and not good, THEY were wrong!

Trace this back to the tweets I showed earlier and you can see this so clearly. Some loved Arcade Fire while others didn’t think they were a real band. Others were happy that Mumford & Sons were trends on Twitter. And then there was the wrath by the true beliebers over Esperanza Spaulding. While there were also many who felt she swooped in and saved the fate of music for all mortals.

It’s an eternal question: What is good music?

You’ll get the same variety of answers if you were to ask who is really screwing up this country: Republicans or Democrats?

The answer will either be that the country is headed in a new direction with Barack Obama, or popular music is garbage (metaphorically speaking). If our favorite ideas, politicians, or rock bands are celebrated by a legitimate source, like the Grammies, or happen to win a popular election, our egos skyrocket out of the stratosphere!

The people have chosen and made their voices heard!!!

However, when the Grammies don’t choose X, or the people don’t elect the “right” leader, our fragile selves are crushed. “They’re full of shit. I know who should have won the Grammy, and I’m glad they don’t like the same music that I do.”

That’s what the kid from earlier, whose favorite band was Metallica, would’ve said.

So, as if it mattered to anyone besides me, what’s my take? I still listen to Metallica, but the Beatles are now my favorite band. Should they be yours too? 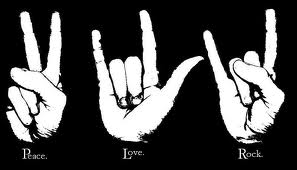 Only if YOU want it to be.

One indisputable fact that I’ll give you is that I have a playlist on my iPod I regularly update with new music, like what I got from Mumford & Sons and the Avett Brothers the night of the Grammies. They’re sitting right beside Lady Gaga, Hans Zimmer, The Black Keys, Esperanza Spaulding, Nine Inch Nails, Pearl Jam, and Roxy Music.

To me that sounds like one hell of a party to crash!

Want me to break your schema a little further? I’ve been listening to Madonna this whole time, but that’s beside the point. I like to think that I can enjoy a variety of music, which others may enjoy too, but there’s also music I wouldn’t recommend to most, like her.

There’s probably a posse on its way to try and take away my man card because of that.

So do I still get upset if someone says the Beatles are not as good as Metallica or vice versa?

Well let me tell you one more thing. I’m a huge fan of Christopher Nolan, and I was upset that the Academy didn’t give him a Best Director nomination. I saw the Dark Knight 5 times in the theater, Inception on opening night, and I own nearly everything he’s made that’s available on iTunes. I believe he’s one of the most talented filmmakers out there and that he got snubbed unfairly.

But then again The Black Swan, The King’s Speech, True Grit, and The Social Network are all great films too, and I’m really happy that films of this quality and artistry are still being made, somehow, in Hollywood. Eventually, the Academy will come around, but in the mean time I can enjoy Inception, whether it wins any awards or not.

Simply put, there’s no reason to choose between Metallica and the Beatles, other than a temporary boost to our vanity.

“There is nothing either good or bad, but thinking makes it so.” -Bill Shakespeare 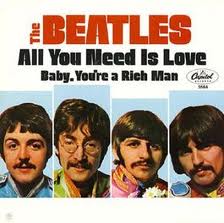 It’s harmless fun to enjoy both, as mind blowing as it sounds, and you don’t need the Grammy’s approval to listen to, or not listen to anyone. Yes I know. Faces are melting, volumes are turning up, and everyone is hugging, kissing, and crying because of the mutual acceptance of one another we can now display.

I enjoyed my new songs from Mumford & Sons, Esperanza Spaulding, and Arcade Fire, but I’ll get to them when I’m done jamming Cee Lo Green.

Agree? Disagree? Who deserved the Grammy and who didn’t? Will Chris Nolan still get mad props from the Academy?